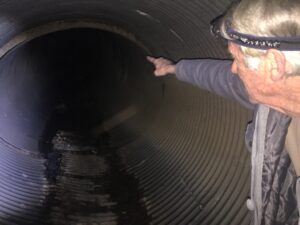 City contract crews were back working Saturday morning at the culvert collapse on Civic Center Way, and the road was again blocked from just east of the traffic light at the school to the top of the hill by the condos.

City councilman Jefferson Wagner Friday night told a reporter there that the 8-foot-diameter steel culvert – estimated to be 68 years old – “has compressed from being round to more like egg-shaped.

The old steel culvert is severely rusted and was to be replaced soon as the city rebuilds Civic Center Way.  The project has hit a slight delay as some residents along the street protested the design, and city manager Reva Feldman said the amount of work changed.

Feldman told KBUU the repairs will not take long. “We got this,” Feldman said from the scene this morning.

A large sinkhole appeared on Civic Center Way late Friday afternoon, and the route was closed for five hours Friday night while a temporary repair was constructed.

On the uphill side, the eight-foot-diameter pipe connects to a pair of concrete funnels, Wagner said, after hiking up the conduits Friday night. One goes under Webster School and the adjacent, old county sewage plant, the other goes under nearby condominiums.

Neither concrete channel is in danger – only the old, round, metal conduit pipe directly under Civic Center Way.

Downhill from the pipe, water is channeled into the canyon barranca for a few dozen feet, then it goes under PCH and the Ralphs supermaket to the beach.

The adjacent city sewer plant is not affected, either.

The old pipe was apparently part of the original 1951 construction of Malibu Canyon Road, which was built by county jail inmates.  The rock work at the outfall matches the rock work up the canyon.

Although L.A. County still is in charge of some flood control structures in Malibu, the pipe under a city street falls to the city to maintain.

This is the third culvert failure in city history.  Kanan Dume Road was closed for nearly two years when a culvert failed just inside the city limits, just after the city incorporated about 25 years ago.

And a section of Fernhill Drive was closed more than a decade ago, as a culvert failed in a barranca between Boniface Drive and Grayfox Street.

On the radio: 99.1 On the web: www.radiomalibu.net On your smart speakers via the Tune-In app

[There are no radio stations in the database]